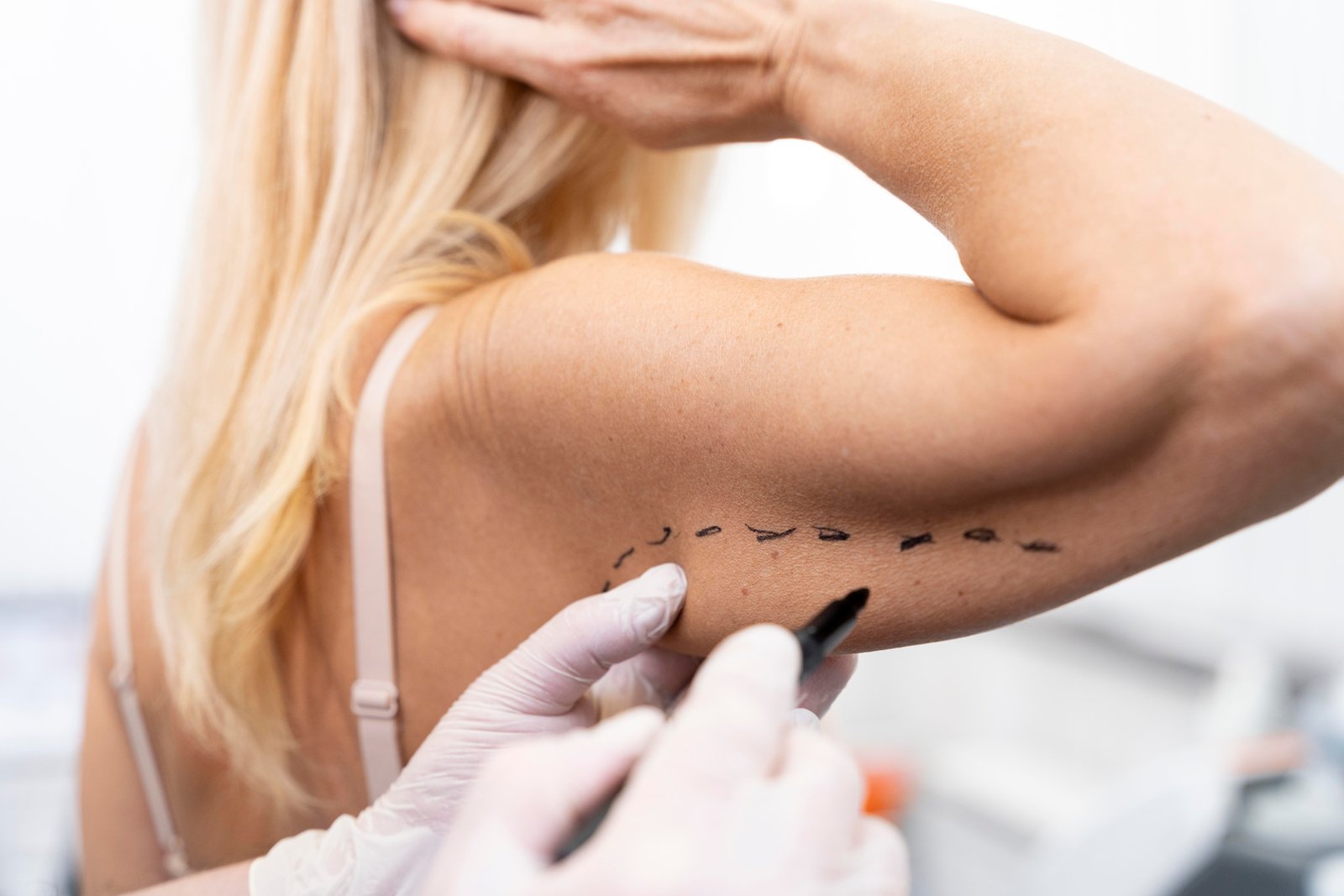 Loosening and sagging may occur in the upper arm area, also called the biceps skin, during periods of rapid weight gain and loss and due to aging. This situation spoils the aesthetic appearance when the arm is lifted up and when wearing short-sleeved clothes. For this reason, it has been observed that it sometimes damages people’s self-confidence. Arm stretch surgery is an aesthetic operation performed to eliminate such problems.

Arm lift surgery is performed under general or local anesthesia and takes an average of 1 to 3 hours. The operation starts with an incision made from the inner part of the arms to the armpits. After these incisions, excess skin tissue and fat are removed. After this process, the arm lift surgery is finalized by suturing the incision sites.
In people who have preserved their skin health, only liposuction may be sufficient.

However, if there is excess skin as well as excess fat tissue, arm lift surgery is absolutely necessary.
Since there is no incision in the non-surgical arm lift procedure, there is no scarring after surgery. In this method, the fat extraction process called Liposuction is applied. This method is highly preferred because it is painless and comfortable. However, in order for this method to be sufficient, the skin of the person’s arm must be suitable and the sagging must be of the appropriate size.

In cases of excessive sagging and fat accumulation, arm stretch surgery and liposuction can be performed at the same time. This method starts with an incision on the patient’s inner arm. Excess fat is removed by liposuction through the L-shaped incision. After that, the skin is stretched and sutured again. In this method, scarring is possible.
Arm lift surgery is not a painful and painful surgery. However, minor aches and pains may be felt during the postoperative healing process. These aches and pains are prevented with painkillers given by physicians. If deemed necessary after the surgery, drains can be placed in the area to prevent bleeding and fluid accumulation. The drains are removed again after a maximum of 2 or 3 days.

As after all operations, the patient should take care to follow the recommendations given by the physician after arm lift surgery.
Elastic bands can be used on the arms in the early postoperative period and showering is allowed 2 days after the operation. It is recommended to use a special arm corset for the first month. Heavy movements and exercises that may strain the arms should be avoided for the first few weeks. The person can return to his/her daily life in a period of 1 week after the operation. Sports can be started within 1 or 2 months after surgery. Smoking should be stopped during this period as it will negatively affect the healing process.

Will there be a scar after arm stretch surgery?

After arm lift surgery, a small scar may remain in the incision areas at first. However, the fact that the remaining scars are in invisible places does not pose any problem for people because they take skin color over time.

People with sagging and fat in their arms sometimes have difficulty wearing short-sleeved clothes. Since sagging arms significantly affect the appearance, it sometimes damages the self-confidence of people. People who want to get rid of such problems and have a more proportional and more beautiful arm structure apply for arm lift surgery.